As regular readers will know, I am keen to see traffic laws to make the roads safer for all. When I heard that the City of Edinburgh Council was proposing to introduce a 20mph speed limit across a large area of South Central Edinburgh, I though this was a great idea and one for which Councillor Gordon Mackenzie (Convener of the Transport, Infrastructure and Environment Committee) should be commended. The proposed scheme is currently going through the consultation phase, with all households in the area covered by the scheme being sent a leaflet, I received mine today.

The Council leaflet explains that “lower speeds make people feel safer when they are walking and cycling and make streets better places to live”. This is widely known outwith the UK, many countries in Europe have 30Km/h (18.6mph) speed limits in built up areas. So there is a wealth of data on the effects of these lower speed limits, not only do they feel safer, they are safer. Barcelona, for instance, showed a 27% drop in accidents in one area of the city after bringing in a 30Km/h speed limit. One study in London showed that the introduction of 20 mph zones was associated with a 41.9% reduction in road casualties. The same study showed the greatest percentage reduction was for younger children and greater for the category of killed or seriously injured casualties than for minor injuries.

It has been known for well over 20 years that, as traffic speed increases, so does the risk to pedestrians:

Many drivers don’t think about the fact that at 30 mph, a vehicle travels 44ft (roughly three car lengths) every second and at 20mph a vehicle travels 29ft (roughly two car lengths). The average reaction time of drivers is between 1 and 1.5 seconds, it takes time to stop, drivers have to think ahead rather than just trying to react to the situation. Lowering the speed limit allows driver more time to thing and so reduces the frequency of collisions.

There are also other benefits to having a lower speed limit: Reducing the speed limit from 30mph to 20mph reduces noise by 3 decibels. Not only is traffic noise annoying, it damages people’s health by disturbing sleep, causing cardiovascular and psycho-physiological effects. Lowering the speed limit from 50 km/h to 30 km/h has been shown to reduce emissions CO2 (about 15%), NOx (about 40%) and CO (about 45%). Also, a lower speed limit can help traffic to flow more smoothly, but only if drivers change their behaviour.

So there is much to welcome in this proposal. However, on looking a little closer, I saw that this isn’t the blanket 20 mph speed limit that I was expecting. No, there are nine “arterial routes” that are being left at 30mph, which really blows a hole in the whole thing. It is known that isolated schemes endorse driving faster outside of the zone, so the current proposal will have the effect of increasing speeds on the “arterial routes”, is this really a good idea? If you take a map of Edinburgh, lay a clear sheet over it, plot the locations of the crashes over the last few years, take away the map, and what do you see? 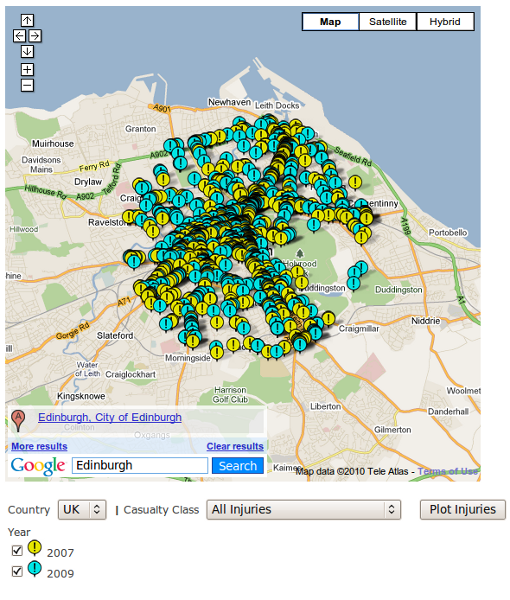 The image above is taken from the Traffic Injury Map.

The outline of the “arterial routes” which are being left out of the 20 mph zone! If this proposal isn’t changed, it will fail to achieve its full potential, surely the roads which need the lower speed limits most are the ones with the highest accident rates, otherwise what is the point? Don’t the people living along the “arterial routes” deserve a better quality of life, too? So if a 20 mph speed limit is good for the residents of Kirkhill Road, why not for those living in the tenements of Dalkeith Road? Or why should people living in Millerfield Place have greater protection that people living along Marchmont Road? Surely these improvements in quality of life should be for all those living inwith the 20 mph zone.

If you agree that this proposal flawed (or even if you don’t), you can give your feed back here.

This site uses Akismet to reduce spam. Learn how your comment data is processed.

If we have 4 waves of covid per year, that means a large % of the population will catch it 1-4 times per year. For most that’s going to be 1-4 week off sick per year (and some worse). How are businesses, schools, hospitals factoring this level of absence into future planning?

What a contrast between Edinburgh and London. Anywhere the junctions have a safe route through for bikes is absolutely heaving... 🤩

This is not an exhaustive thread. We all know there is more and that it will increase.

Keir Starmer has not been issued with an FPN. But in other actual news a Tory MP and Deputy Chief Whip has sexually assaulted two men and is not resigning as an MP but playing the victim.

© 2022 the ubiquitous blog — Powered by WordPress

Theme by Anders Noren — Up ↑